After the incident on Meh-Trick with MOUSE version 1, the surviving technicians were flung through the temporal rift to a point just under 80 years ago. They emerged in the "Meh-Trick asteroid field", and blamed the geo-thermal-nuclear explosion that decimated Meh-Trick on "Unrealistic expectations, inadequate testing, and deadlines that could not be met". They also placed some blame on the person who asked MOUSE to "Turn up the heat", but claimed that person was just 'the last straw on the haystack of incompetence'. The technicians then vowed to revive the MOUSE project, but on their own terms.

By this time, most people were jetting about in space-craft, and hardly anyone used large, immobile, central computer systems in ground facilities anymore, at least not without installing an access panel in every room, so MOUSE needed to be re-designed to fit into the space-ship culture. Due to their large size, they were marketed at being used on very large cargo ships or battle-cruisers.
It took them almost 10 years to come out with a working prototype of MOUSE version 2 which, upon close inspection, seemed to be an almost exact copy of the version 1 MOUSE. The main difference with Version 2 was the fact that it came with a 500 page instruction manual, including over 1200 phrases that should never be uttered to the MOUSE unit, and the consequences should the wrong words be used.

Of course, even with the extensive testing done by engineers and technicians, there were still some phrases which could not be accounted for.

Many people quickly returned these units after the non-improvements were discovered, although the vendors were vehement in their opposition to refunding money for units which had been beaten repeatedly by baseball bats, shot by laser-cannons, or dropped in back holes. They also claimed that many of the returns were not MOUSE units at all, but rather scraps of space-ship material. Customers claimed they did not have the patience to sift through debris so shortly after losing so many good crew members.

There were a number of court cases involving MOUSE, with charges including accidental death, gross manslaughter, incompetence causing death, and even ranging all the way up to the rarely employed charge of "Multiple painful and messy deaths and massive destruction caused by an unlicensed super-weapon which was not being actively employed in planetary conquest" - a charge which only exists on Galacton 4, where the occasional super-villian attack is tolerated (gives the heroes something to do), but random super-weapon firing in a complete no-no.
Few of the cases actually succeeded, as the comprehensive manual often showed that the customer used the unit improperly, by speaking one of the documented phrases. This usually absolved the company of guilt, or at least bought them enough time for the court to try and replicate the event under supposedly 'controlled' conditions.
MOUSE version 2 was given a medal by the 'Anti-lawyer league of Phenon 7', after successfully dispatching its 100th lawyer during a particularly long case.

Although few photographers got close to the MOUSE version 2 and survived, we do have this Artists Impression of the unit, as seen in one of its many court cases.
Note how it's designed more sleeker than version 1, how the... light.... you know.... Ah, who are we kidding? 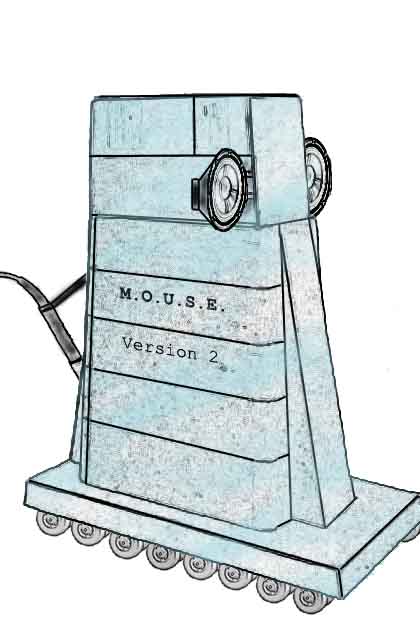 What? That's it?
Yep, that's it.
Wow, you'd thing blowing up a planet, getting caught in a temporal rift, and spending 10 years redesigning a product would yield something better.
Well..... it is a VERY large manual, y'know.
Whatever.