As with any universe where space-faring is considered an everyday occurrence, you need a variety of ships fitted with an arsenal of weapons, and defended by equally shiny defense systems. This section is dedicated to the technology that makes sure you're the last one standing. 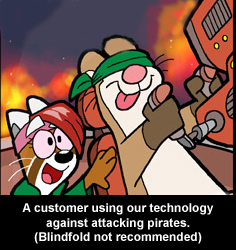 These are small, self-propelled, cylinder shaped projectiles. They do not contain any homing systems, and are bought in bulk to keep up with demand during a fire-fight. A single torpedo can be loaded and launched within 4 seconds (longer if the firing equipment doesn't meet specifications).
Small enough to be loaded into a canister mounted upon/near the firing turret, they are also quite light, meaning they can be used in hand-targeting turrets (powered movement for convenience of course), as opposed to the larger models, which can only be fired from fixed launchers.
Their damage is small, but not negligible, several shots with these in critical areas can disable a vessel, yet a full spread of them will leave enough internal structure for the crew to survive (if not killed by explosions).
The intended use for these weapons is to provide ships with a basic defense against marauding pirates (spray them with these and run like hell), and are not intended to actually initiate battles.

Notes:
- Data on Speed and Range of the projectiles currently unavailable.
- These are the standard weapons load-out on all vessels purchased from the "Galactic Vessel Emporium" 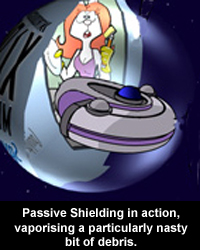 This is not so much a shield as a characteristic of all vessels carrying a Clarkson Mk 2 or higher warp drive.
The field emitted by the warp coils, which enable ships to travel safely and smoothly at faster than dark speeds, surround the ship, and cause any external debris to be vaporised upon contact. This usually provides a nice light show.
However, being a weak field, not designed for defense, it can be disrupted fairly easily by super-dense materials (such as those found in many munitions) which can survive contact with a warp field.

Notes:
- Does not protect against energy weapons, nor does it prevent any energy-based transportation
- Field weakens as speed decreases, as the warp coils do not output as much energy at low speeds. Inactive at stand-still (as the warp coils are off), yet even a slow speed will generate enough energy to provide basic protection.
- Matter impacting on the shield can cause disruptions to the warp field, creating temporary inconvenience (and some loud noise) to occupants.
- It has been demonstrated that some objects, upon vaporisation by the shield, can cause quite large and intricate visual effects which, accompanied by the generated noise, can be quite disconcerting for some viewers. Parental guidance is advised when traveling above warp 7.