The original design brief for MOUSE was "A machine which will eliminate the need for people to actually go to computers for minute-to-minute information", essentially, they wanted a access point that would come to the customer, as opposed to the other way around. As an afterthought, the focus groups detailed a desire for a personable, somewhat cute, interface to the computer systems where they work, something that wouldn't remind them they were basically just punching numbers into a computer.
One company, 'Home and Garden Mechanoids Inc', rose to the challenge.
It is over 400 years ago now since the first MOUSE designs started, a simple unit which could relate, verbally, prompts from a centralised computer, usually in the environment of a large facility or factory. Many revisions were made before the first version of MOUSE was actually prototyped. These revisions included the ability to accept verbal responses back from the user, with the voice recognition done on-unit to save the main computer for more time-critical tasks, the ability to store and playback messages on the unit (sort of like an answering machine) as well as a feature which allowed it to hide away in specialised docks within each serviced area when not in use. These early prototypes (and indeed many of the early models) were corded units, with limited movement and maneuverability. They were designed to pop into a room, give an alert from the computer to the user, and accept a response before hiding back in it's hole.
Only 2 years since the initial design briefs, MOUSE version 1 was released. (See image below)

You are probably wondering by now what the MOUSE acronym stands for. The truth is, we don't know. Many phrases have been suggested, including such things as "MObile Unit for Servicing Engineers", "Mostly Obsolete, Useless, Superseded Excrement", and the like.
The true meaning of the MOUSE acronym was lost shortly after its initial debut when, due to an apparently malfunctioning voice recognition unit, the planet Meh-Trick - which housed the MOUSE factory, as well as many other important buildings, such as the Galactic Standards Council - fell victim to a geo-thermal-nuclear explosion, decimating the planet, and killing the only people that knew the real meaning behind the MOUSE acronym.
Some of the technicians, who were saved when they're escape vehicles were caught in a temporal rift shortly before the planets explosion would have wiped them out, claim that the Marketing Department were the only ones to know the true meaning of the MOUSE acronym. Apparently, both the Marketing and Publicity departments stayed until the very end of the planet, trying to work out a way to put a positive spin on the situation, and working out how to incorporate this 'massive power' into their next ad campaign.

Here we see the first version of MOUSE, as shown in in conceptual sketches. Specifications below. 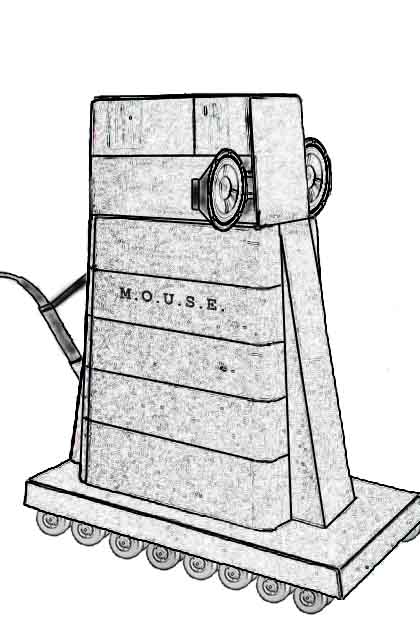 Height:    Five (5) units
Weight:   Approx. 600 pounds (300 Kilograms)
Power:    External power cord of up to 400 unit length. This cable is also designed to carry data to the unit.
Movement:   Propelled and steered by four (4) large mini-tracks hidden underneath the unit, each powered by its own electric motor. The unit is stabalised by sixteen (16) sets of dual-tyred free-wheeling castors, eight (8) positioned on either side of the unit.
Features:
- Dual-speaker design. Left speaker for the unit to issue prompts, the right for accepting commands from the user
- Centralised steering. The MOUSE unit is maneuvered into position by the central computer, which determines the users position through security cameras throughout the facility.
- On-board voice recognition and translation. The unit hears your voice through the right speaker and, through thorough consultation of its massive tape database, determines your sentence, and sends it along to the central computer as a properly formatted command.
- On-board storage. Leave a message for other people in the massive tape storage facility within every MOUSE unit.